While becoming one of the biggest WWE stars of all time, “Stone Cold” Steve Austin usually kept his entrance fairly simple.

Black vest, black boots, middle fingers, and occassionally some real broken glass to match up with his iconic theme song, Austin’s stomp to the ring was always memorable in spite of its simplicity. You’d be hard pressed to find a wrestler in his prime who elicited a larger response from a live audience than Austin when that glass shattered.

However, when Austin looks back on his memories of wrestling, the greatest WrestleMania entrance of all time doesn’t belong to him. In fact, Austin claims that honor goes to none other than Triple H.

Austin spoke about this opinion during a recent edition of the Steve Austin Show podcast. The topic came up during a discussion about a gift Austin recently gave Triple H while attending WWE RAW at Madison Square Garden. That gift was a large framed picture of the band Motorhead, which Austin found while meeting with an interior designer alongside his wife.

“There was one picture out of all of them, and there were so many famous people in all these different pictures, but the one that just jumped out was this framed picture of Motorhead with Lemmy and the guys on either side of him. And the way the light was hitting this picture… it’s a photograph. It’s a picture. A photographer took it. Whatever. But it’s framed up in this old frame and it [has] been beaten up a little bit and I don’t know where it was hanging for all of these years because this picture, this photograph is from 2005 and there was this little card that came with it that said, ‘you know, this is at The Wiltern Theatre.’ And for some reason, just knowing Triple H is a big Motorhead fan and he had a close personal relationship with Lemmy. They had many conversations together.” Austin added, “so this picture just jumps off at me. The way it’s lit is just phenomenal.”

Austin has had the framed picture for over a year and was finally able to gift it in person to Triple H at MSG. 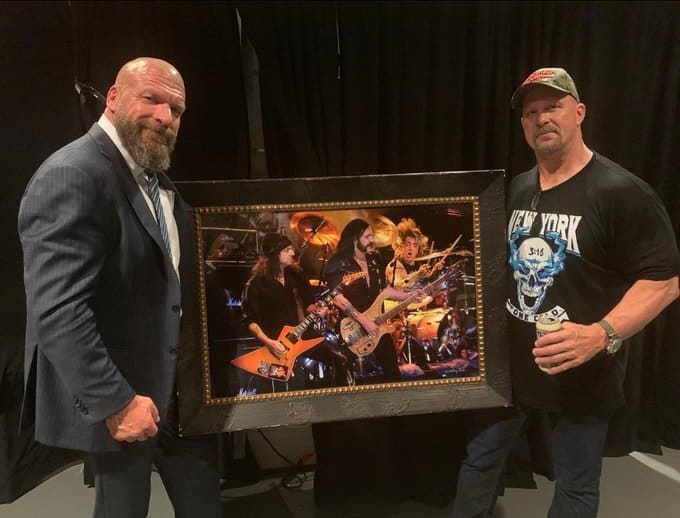 “So I picked that picture up, Kristin and I picked it up and put it on the Jeep and it has been sitting in my house for over a year,” Austin explained. “I didn’t want to mail it. I didn’t want it to break. I didn’t want it to get crushed. When WWE was in town, I was out of town. I thought I was just going to take it to the Staples Center, but I never had a way to get it to Triple H. So finally, when I was going to go to [Madison Square Garden], I said, ‘this is my chance to take him this picture and hand it to him personally.’ So I took it to him and I said, ‘hey man, I found this about a year ago at this meeting and for some reason, I just knew that you had to have it.’ And he was just blown away by it. He absolutely loved it. You know, Triple H is a very reserved guy. I didn’t know what he was going to think. And it turns out, all these years later, at 2005, he introduced them at that concert that night! Yes [at The Wiltern], yes, [in Los Angeles, California], he was there announcing them on stage before they made their entrance! Yeah, so that picture was destined to end up in his hands!”

Of course, Motorhead brings back memories of the band personally playing Triple H to the ring at WrestleMania 17 in Houston, Texas at the Astrodome.

“And Lemmy performed Triple H’s song at WrestleMania 17,” Austin said. “And still, to me, that’s the greatest entrance. Watching them play that song, listening to them play that song, [imitating Lemmy] ‘we’re Motorhead – we’re going to kick your ass’. Then, they play for about a minute and then [Triple H] comes out and I’ll never forget it. I still watch it every now and then on the [WWE] Network to this day.”